Prepare for a Counterattack! Drive on Moscow comes to iPhone

Drive on Moscow, the hit iOS strategy game, has been updated to version 2.0 bringing iPhone and iPod touch support, new AI opponents, and more.
Drive on Moscow 2.0 includes:
* Universal Support – Play this hit mobile strategy game on iPhone, iPad, or iPod touch. The interface is tailored to each device, giving you the best experience whether on the go or playing at home.
* New AI Opponents – Challenge two new AI opponents featuring machine learning and Alpha-Beta pruning. These AI opponents think deeply and will provide a new experience for veteran players.
* Improved Online and Sharing Features – New options let players share their victories and invite others to join them online. For online play, we’ve added a one-week timeout to all games to keep them flowing and competitive.
Drive on Moscow puts players in command of the largest battle of World War II, tasked to defend the homeland as the Soviets, or lead a bold push to seize the Russian capital as the Axis. Featuring turn-based gameplay and an award-winning UI design, Drive on Moscow is built from the ground up for iOS. Play online, face-to-face, or against challenging AI opponents. With accessible rules, Drive on Moscow is a great wargame experience for casual and veteran players alike.
Drive on Moscow is designed by renowned board game designer Ted Raicer and is developed by Shenandoah Studio, the same team who brought you Battle of the Bulge, one of GAMES Magazine’s Top 100 Games and winner of two Charles S. Roberts Awards.
Key features of Drive on Moscow:
* Play as the Soviets or the Axis across three scenarios and the full campaign
* Command tanks, cavalry, infantry, airborne and more
* Play against multiple distinct AI opponents tailored for each scenario
* Play online with enhanced chat features, new Game Center UI, and more information about your adversary
* Experience Russian winter on a map that changes with the weather
* Replay entire games to savor your triumphs and learn from defeats
* Compete on a global scale with leaderboards and stats
* Learn with the tutorial and quick start guide, or visit our online strategy forums to learn from other players
* Full rules are included for advanced players
* Includes extensive historical photos and commentary
* Designed by Ted Raicer, award-winning designer of Paths of Glory
Praise for Drive on Moscow:
” Drive on Moscow is a triumph, a game as sweeping as the campaign it seeks to simulate.” – Gamezebo
“This sequel is just as deep and engrossing as the original” – Pocket Gamer
“Not only does Drive on Moscow match the deft, beguiling presentation of its predecessor, but nearly every decision has the heft of a Soviet hammer.” – Pocket Tactics
Drive on Moscow 2.0 is $4.99 USD (or equivalent amount in other currencies) and available worldwide exclusively through the App Store in the Games category. To request a review copy or schedule an interview, contact Bradley Cummings, Marketing Director. 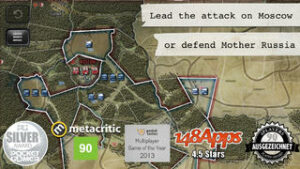 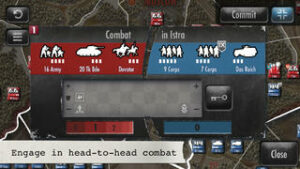