Categories Game – Multiplayer is a Throwback to Scattergories 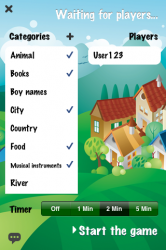 We came across an app that has flown completely under the radar (as many of them do) and were instantly reminded of the 1980s Hasbro party game Scattergories. This Bluetooth rendition for iPhone and iPad, called Categories Game – Multiplayer, is a basic likeness that can be played locally as well as through Game Center.
The Categories Game app gives players a fairly wide assortment of customizable game options and is played pretty much the same way as its table-top inspiration. There are four default categories to start, but players can add as many as they like. Category lists can be tailored to a group of players by toggling saved categories on or off. Additionally, the length of time each round lasts can be pre-selected as well.
The object of the Categories Game is to name something from each category that starts with the letter randomly assigned for each round. For instance, if B is the assigned letter, each player must come up with something that starts with B for each category. Only the categories chosen by the game host are playable, thus providing a slight advantage to the host. Scoring is based on correct answers and the uniqueness of that answer. For instance, if every player correctly answers “banana” as a food or fruit that starts with B, all players only receive 5 points as opposed to the possible 10 for being the only player with that answer or 20 for being the only player with an answer.
Another nice element in the Categories Game for iPhone/iPad is the Wikipedia oracle for disputed answers. If the host or another player determines a given answer is wrong, simply tap on it and a menu pop ups allowing the host to “check Wikipedia.” Wikipedia then says whether the answer is right or wrong – probably by checking it against their database of entries. Of course, the human mind can override what it knows to be right or wrong, but only the host has the ability to allow or disallow a disputed answer.
Whether you play locally with friends or use Game Center to play with anyone, Categories Game – Multiplayer is a pretty simple rendition of the popular board game. It may lack a catchy name and a tiny bit of intuitiveness, but it is completely playable. Experiment with more creative or challenging categories when playing with adults and then simplify them to play with children and challenge their memory and spelling skills. In order to play locally, make sure Bluetooth is turned on for all devices.