Battle Pirates, Aliens, And More In Galaxy On Fire 2! 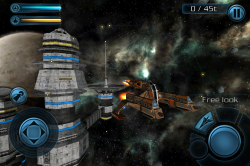 As someone who not only loves to play his games on the PC and XBOX but also on the go, there are only a few moments when a game can make you absolutely speechless. Galaxy on Fire 2 is one of those games – not because it’s just a great game, but because it brings the experience you expect out of mainstream games into the palm of your hands.

For years now, iOS and Android alike have lacked that very special place in the world for true immersion. While many games sell simplicity, a casual nature, or quick gameplay, Galaxy on Fire 2 is none of these, and instead a complete 180 in the industry standard of reserving mobile platforms for casual gaming.

In Galaxy on Fire 2, you play Keith Maxwell, a Terran officer-turned-mercenary who, after a malfunction in his fighter, is sent forward thirty-five years into the future, and into the fray of the ongoing wars between four major nations: The Terran, Vossk, Mido, and Nivelian, whom all are meanwhile harassed by the alien-like and unknown Void Race, who destroy countless freighters between the various nations. Keith is swooped up by the Terran fleet by some old friends to help fight the Void threat and save the galaxy.

GoF 2 is a true example of an immersion experience because of what it offers you. You are given a ship, some money, and told to go around the world as you please. You can take on quests, follow the storyline, work as a simple miner or trader – and this all comes at the pace you want it to come. Akin to a cross between the text-based legend Space Traders, Elder Scrolls, and Ace Combat, you have a science fiction masterpiece that drives you across the galaxy to do whatever you want. There are no boundaries in GoF2, instead, the game lets you take the trails you want, and make the friends & enemies you please. It’s this fine mixture of these elements in the game that offer a true adventure experience and offer countless hours of gameplay.

In recent updates to the game since its 2010 release, FishLabs has worked hard to continually add content to the game, despite the immense amount it already holds. Its latest updates add new items, ships, and vehicles at no extra charge, as well as the opportunity to download a brand new DLC: Valkyrie, with its own immense set of content for the game. What FishLabs is making here is more than just a game for afternoons – you will lose yourself in this game.

With all of its greatness though, there are a few things that may rub you the wrong way. The storyline is weak – at best tacky, but its experiences and the characters you meet from it make up for the rather shoddy acting ability of Keith Maxwell, not to mention the amazing voice acting at work. Combat can get repetitive, and just leaving a station can invite trouble. The game is not easy, not by a long shot – so be happy it saves every time you visit a station. With all of this in mind though, it’s important to note Galaxy on Fire 2 compares to no other 3D adventure game on the market, where the gameplay is actually enjoyable – and other games like N.O.V.A can get past their finicky controls. GoF2 takes advantage of the touch screen to its greatest potential, and it shows through the fun space battles you can have ingame. It’s truly a far cry from its 2009 predecessor, Galaxy on Fire 3D, and is just waves ahead in gameplay and performance.

All in all, Galaxy on Fire 2 is nothing short of a mobile masterpiece, and a must-have for the heavy gamer on the go. The only moments I could make myself stop playing were when my iPod’s battery would get critically low, and that was after hours of gameplay. This game can offer you dozens of hours of gameplay – all without multiplayer (take a hint, Call of Duty).

Galaxy on Fire 2 is now featured at a discounted $4.99 in lieu of its newer, flashier, bigger HD cousin, retailing for $9.99, and is a universal app for iPod and iPad devices running OS 3.1 or later. The HD version is only compatible with the iPad2 and later, or the iPhone 4 and later.

Assassin’s Creed: Altair’s Chronicles – In what’s arguably one of the biggest releases yet on the iPhone, Gameloft…
byAbhishek Singh

Asva the Monkey HD is the first full-feature game by the developers at Osja studios, and, boy, is…
byAbhishek Singh

If you love cooking, then it’s a great time to be in the kitchen. Digital cookbooks are changing…
byAbhishek Singh