Since the launch of Overwatch 2, there’s a lot of hype around it, as we have seen, and almost all famous streamers are busy playing the game. However, not all is well with the game, as players have reported several new flaws and difficulties with the new game.

In a blog post, the Overwatch 2 devs apologized to their fans for the early troubles, and they also stated that they would conduct many double XP weekends and give out free skins to help players reconnect after the game was frequently unplayable during its initial week. Overwatch 2 was troubled for several days by high queue times, conflicting guidelines, and the deletion of some game characters.

Since the game’s release, there have been several mishaps, including multiple DDOS attacks on the servers, network troubles, and a protest over the fact that players must have a cell device with a subscription in order to play the game.

The developers of the game have announced that Overwatch 2 players will receive free game skins and various other freebies in order to compensate for the game’s bugs and faults. Mike Ybarra, who is the president of Blizzard, has indicated that patches and other significant modifications would be made to the game in order to make amends to users. 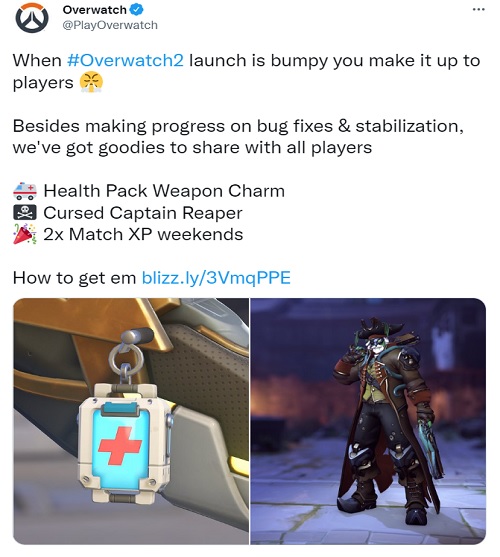 Blizzard has confirmed that between October 25 and December 6, any person who checks in will receive a new legendary skin for Reaper, the Cursed Captain, as well as a Health Pack weapon charm and 2x Match XP. Blizzard has also acknowledged that the move to a live service approach has enabled developers to make modifications on the go and keep Overwatch 2 up to date. They’ve also teased that there’ll be a great deal more to come.

Also Read: D.Va From Overwatch 2 Is Now The Most Searched On Adult Sites

Blizzard also removed Bastion and Torbjörn from Overwatch 2 for triggering major issues in the game. Bastion’s Ultimate had a lot of bugs and was entirely broken. A bug allowed the weapon, which normally allows players to unleash a tremendous blast up to three times in three seconds, to be fired as many times as players could in that period.

Complaints And Problems That Overwatch 2 Players Are Facing

There have been a lot of complaints that all the Overwatch 2 players are reporting about, like the game’s matchmaking feature, exploiting the game’s bugs, and the frequent disconnects.

The matchmaking feature, which most games now have, is a good thing, and how it works is that if you play really well, you get a higher rank, and when you play competitive rounds, you will be matched with players who match your skill level, but some players have noticed that their games are uneven.

People on Reddit have posted photos of diamond-ranked players pairing with silver-ranked people, which is not fair. Matchmaking isn’t simply a difficulty in-game; it’s also a problem for players to distinguish their ranking from their teammates since OW2’s competitive rank medals are so small.

Overwatch 2 has just been released and is a new game. However, there have been a few complaints of people using exploits and abusing the game, with players spotted using aimbots. Anyway, players who are caught cheating get their accounts terminated, which is good, but what isn’t pleasant is the penalty for leaving a game in the middle of it when it wasn’t their fault.

It seems like Overwatch 2 already has some bad players using the new cheat program. The overall gameplay is so unnatural, he's only aiming for headshots.

The account is said to have been suspended 🚫 pic.twitter.com/KMG0adyXBX

There have been issues with game disconnecting, where players that have their game disconnected are taken back to the start screen, while others have reported the game totally resetting or shutting down their PCs.

Players went to the Overwatch forum websites for some fixes for their problems, but they learned that others were experiencing the same problem, despite their PCs running other demanding games without trouble which could only mean that the fault is with the game.

The game’s developers have promised to fix all the issues and bugs very soon, so the players just need to hang on for a little while and to report any bugs or cheats they encounter.

The recent GTA 6 Leaks couldn’t have come any sooner, as many fans were desperate for even a…
byAbhishek Singh