TwichCon, as you may be aware, was held earlier this week, and it drew a large number of twitch streamers with large followings. Although the event was fantastic, there were a few concerns regarding its foam pit, where streamers were spotted playing. Adriana, a Twitch streamer and prominent adult actress, claims to have broken her back in two places after diving into a foam pit live at TwitchCon.

She can be shown gleefully jumping into the pit in a video, but nearly soon after landing, she begins to moan in pain. Chechik announced to her social media fans that she would be undergoing treatment and have a rod implanted into her backbone for assistance.

How Did Adriana Injure Herself During The Livestream

Twitch streamer Adriana was shown leaping from a stand into a pit filled with foam blocks in one of the videos, which you can see below, but something went wrong when she landed on her back and could not get back up. The mishap was far more severe than it appeared, as she took to Twitter to explain what happened and that she could have fractured her back.

Adriana Chechik (@ChechikTv) looks seriously hurt after jumping in the foampit. Looks like #TwitchCon cheaped out on the padding and amount of foam. pic.twitter.com/BRPSs1EKVI

According to claims from media sources at TwitchCon, such as the Washington Post, the foam pit was not properly set up and did not belong to Twitch but instead was part of a Lenovo booth promoting its newly launched gaming PCs.

Lenovo staged many gladiator competitions,” in which contestants posed on a small platform and attempted to throw down their opponents with a purple “instrument” resembling something from the gym.

Adriana blasted Lenovo on Twitter for informing people they could jump into the pit, though there doesn’t appear to be agreement on that. Other TwitchCon guests have said that Lenovo directly ordered them not to jump into the pit. Furthermore, the Washington Post stated that Lenovo required participants to sign disclaimers recognizing the chance of personal danger or property damage. 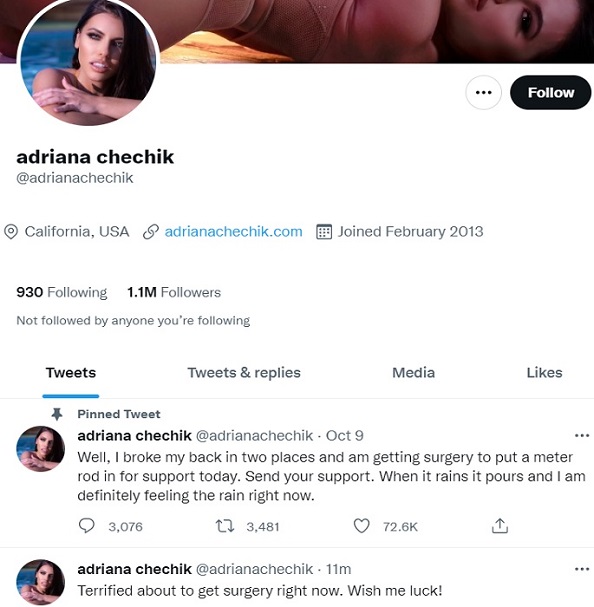 However, Adriana is correct that she was not the only one harmed in Lenovo’s bouncy pit. EdyBot, the second streamer in the video with her, stated on Twitter that although she fell into the foam pit relatively gently, she “felt a shock up my back and had discomfort for the remainder of the night.”

TwitchCon is a highly popular convention that connects and unites various streamers with their fans. It is held two times every year, once in North America and once in Europe.

Due to Covid, the in-person event was canceled in 2020 and broadcasted online instead. TwitchCon returned this year after a two-year absence, with TwitchCon Amsterdam in July and TwitchCon San Diego this weekend.

Amouranth Onlyfans Hacked? Everything You Need To Know

Amouranth, the controversial star of twitch and a celeb with a huge number of followers on Onlyfans, recently…
byAbhishek Singh