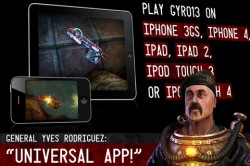 In typical mobile gaming action Gyro13 – Steam Copter Arcade HD offers gamers some high-flying action while trying to simultaneously intertwine a thick plot into the mix. While the storyline leaves much to be desired, I must give them at least an A for effort as it does provide an interesting take on the arcade genre. I also give them an A+ for gameplay.
While most gamers will be drawn to this game for its ability to provide constant and addicting action, some will like the plot, but most the action. The app is built as a canyon-type or what some would say a “corridor flyer” and it’s every bit fun with gameplay as it is interesting to look at with smooth and stunning graphics.
However, I encourage would be gamers to not be too voyeuristic as the entire point of the game is timing. Timing to raise, shoot gaps with the perfect helicopter angle and of course shooting the opposition to smithereens. All of this attention to chopper maneuvering will prove important, especially as the game progresses in levels and difficulty. The walls will get extremely narrow.
Instead of this being an all-out blitz to get the highest score, much like those survivor genres, this app has a start and finish for every level. And to get to the finish, the gamer must perform a smattering of lifts, holds, lefts, rights and more to take out gas clouds, get through narrow spaces, pick up the miners and evade heavy machinery. But don’t take too long as the clock is tick, tock, ticking. As the game progress, I found the level of intensity to be immensely satisfying and it satiated my appetite for last-minute saves and barely getting to the finish line.
Gyro13 – Steam Copter Arcade HD should not be taken lightly. It is a force to be reckoned with. Like I said above, this game gets very difficult as the gamer progresses through the levels and with this difficulty will be a lot of frustration. However, it’s within this gripe that I also find love for this game. On one hand, I found myself trying and retrying levels over and over, but on the other hand I always came back for more. There is the rub. It’s fun. It’s difficult. It’s addictive.
Ever since the game came out I’ve been churning away, bringing the chopper through the crannies and corridors for the ultimate and very intense gaming experience, well, as much as you can on a mobile device. But then again, it is the future of gaming. That’s why Gyro13 – Steam Copter Arcade HD is a must buy.