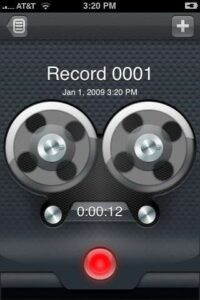 At last count, the App Store featured something like 60 apps with voice recording capabilities. DAVA Consulting’s iDicto happens to be among one of the better ones I’ve tried for simple voice-note-taking.
As with virtually every voice recording app I’ve tried, iDicto is straight forward and easy to use. Press a button, record, replay, pause — you know the drill. What you want is a voice recorder that works as easily as (or better than) the real deal and this app does that.
iDicto tags each recording with a name, time, date, length of recording and format. You can also add one of several icons and sort the list of recordings by priority. You can name your recording, or let the app do it with Record0001, Record0002 etc. and you can rename your recordings, sort and group them and append audio to previously recorded notes. I like not having to name my recordings first, like some apps I’ve tried.
When you’re done recording, you can email them or sync them via Wi-Fi (over the same network) to your Mac or PC desktop. When I tried syncing to my PC, the iPhone and PC found each other within seconds and up popped a list of recordings inside my Web browser. It would be nice to also be able to manage the recordings on the iPhone, for example, to delete them from the iPhone but it’s a one-way street.
To email a recording, DAVA’s app uploads the recording to its server and then passes a link back to you that you can send to someone via email. The link is valid for 10 days. What happens to the audio that’s sitting on DAVA’s server is unclear. I’d be wary of uploading anything sensitive for just that reason. Of course, you can always send the recording to your desktop and attach it to an email.
iDicto features two audio recording formats: Audio Interchange File Format and Core Audio Format. The difference is AIFF files are limited to 4 GB, or 15 minutes of audio. CAF supports an unlimited number of minutes of audio. I haven’t seen that feature before. iDicto also has low-good-best audio quality settings. I found the recording quality at the best setting acceptable. I sure wish it were louder, though.
The graphical interface is nicely rendered, and for the most part, one of the better-looking ones I’ve seen. What I really dislike is the recording and playback buttons — both are garish red blobs.
I’d like having some sort of indicator to give me an idea of just how well my recording is going — simulated LEDS, VU meter — something. I want to know the device is well-positioned and operating at its optimal ability. It would be nice to have the app record start and stop when someone is speaking, like a physical recorder, but that’s not a deal breaker. What would be fabulous is having the ability to record telephone conversations, but I don’t know if that’s even technically feasible.