The iPhone 14, like its predecessors, comes with a plethora of new features and hardware improvements which we’ll go over in depth below, and also some of the looked-over or unnoticed tips and tricks which you can use to make your device handier.

Here we will be talking about the best new features that the iPhone 14 comes with, like its new design, display, camera, and many more things.

We all know that Apple improves the camera quality of the iPhone with each new release, and this year was no exception, as we received a noticeable camera boost on all models. All three cameras (primary, telescopic, and ultrawide) have been upgraded and perform really well during low-light shootings, thanks to its powerful 9-LED flash.

Apple introduced the all-new Photonic Engine, which is responsible for powering its 48MP primary camera that offers better clarity and 2x increased low-light performance. Apple ProRAW was a distinctive feature of the iPhone 12 Pro and Pro Max, and it remains prominent in each iPhone launch and can also be seen in the new iPhone 14 Pro and Pro Max.

It can be used uncompressed at 48 megapixels, giving you additional editing options, and videos can now be taken at 4K up to 40 frames per second in Cinematic mode, which was previously unavailable.

The display of the iPhone 14 has been updated and filled with new features. The finest feature is the new Always-on Display, which we’ve seen on Samsung phones. This allows you to just glance down at your iPhone to view your incoming alerts and notifications without having to tap the screen.

If you don’t like this function, you can easily disable it in settings to conserve battery life. 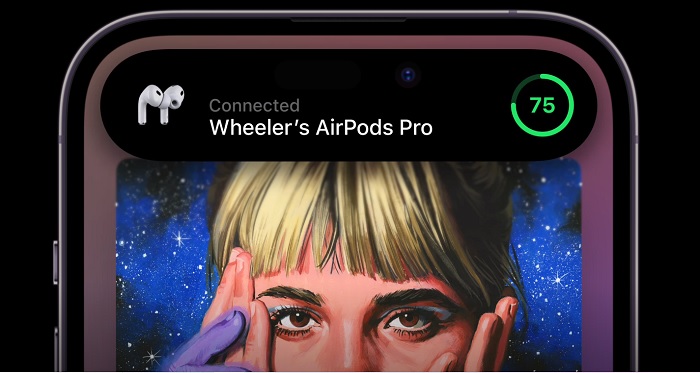 The iPhone 14 and iPhone 14 Plus both have Apple’s Super Retina XDR OLED display, which has maximum HDR visibility of 1200 nits. The front glass has Ceramic Guard for increased durability. Both these models have a maximum brightness of 1,600 nits and 2,000 nits for outdoor use, surpassing the display performance of the Galaxy S22 Ultra.

When comparing the iPhone 14 Pro and Pro Max design to previous generations, not much has changed. The pro features a 6.1-inch display, while the pro-Max has a 6.7-inch display. One of the primary distinctions between both versions is that the pro-Max has a significantly higher camera bump. 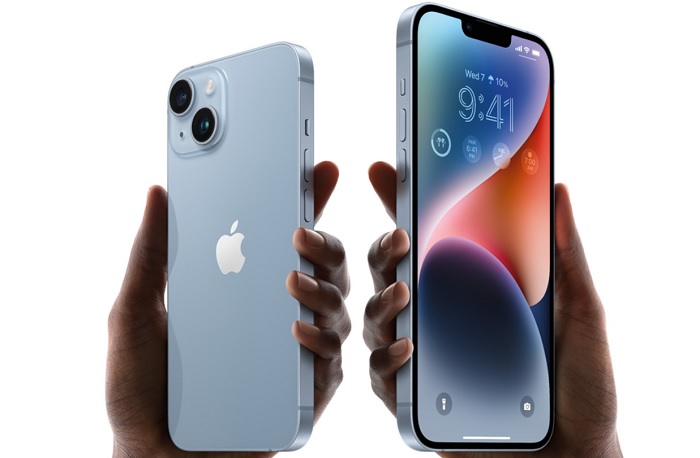 A lot of us will appreciate and will be happy to see that the iPhone 14 Pro does away with the infamous selfie-camera notch. However, this does not imply that the screen is absolutely perfect. Rather, there’s a pill-shaped cutout known as a ‘Dynamic Island,’ according to Apple (New Display Feature).

Basically, what it does is that it can expand alerts and notifications such as phone calls, music, and numerous other background activities.

As far as we know, all four iPhone models will have improved internal processors and chipsets. These are the main bits of equipment that perform the most vital functions, and they are responsible for making the latest iPhone models the quickest ever.

The iPhone 14 is powered by the same A15 Bionic processor as the iPhone 13. That may seem bad, but the good news is that the chip has been significantly upgraded – the graphics component will feature a 5-core GPU that is 18% more powerful, and the CPU and neural processors have also been upgraded.

However, the real upgrades will be seen on the new iPhone 14 Pro and Pro Max. The new A16 Bionic processor, which is approximately 40% quicker than the A15, will be used in the Pro variants. It also consumes less power than the A15, resulting in a much longer battery life.

Apple has introduced a new Action mode that will be available on all iPhone 14 models. Basically, Apple has improved picture stabilization to the extent that a tripod is no longer required while recording and filming videos. Although it is not activated by default, utilizing Action Mode is incredibly simple.

The feature Action Mode is off by default, as seen by the line across the icon in the Camera app. When activated, the logo switches colors and a little pop-up alert with the words “ACTION MODE” displays.

To turn off Action Mode, simply hit the same symbol again, and another alert displays that says “ACTION MODE OFF.”

Apple announced a new subscription service that allows your iPhone 14 to make emergency calls even when there is no internet or mobile coverage, which sounds fairly wonderful, but how does it work?

It accomplishes this by connecting to satellites flying high above you and allowing you to call for help when you don’t have a cellular connection – which may be a lifeline for folks living in remote places.

Another great new feature that will be available on all new iPhone and watch models is Crash Detection. It’s also possible on the apple watch because it has a “High-g accelerometer” and built-in gyroscope, which can measure up to 256g of force.

People are still getting used to their new iPhones, which come with a variety of changes brought on by iOS 16. We tried to cover many of the most popular iPhone 14 new features, tips, and tricks, and we may have missed a few, but let us know what your favorite feature is or if you have any other useful tips to give in the comments below.

Puzzles are far and wide one of the most popular games for iOS devices, yet the mathematics genre…
byAbhishek Singh

ALK Technologies, the leading provider of navigation and GeoLogistics(TM) software, will preview the latest features of its CoPilot…
byAbhishek Singh

Angry Birds Space is Intergalactic Phenomenon worth Every Penny

Space, the final frontier… Alright, I might be mixing genres up, but Angry Birds Space is now No.…
byAbhishek Singh

Whether you’re an astronomy buff, or merely a curious star gazer, then you’re probably familiar with Vito Technology’s…
byAbhishek Singh