Is Fortnite Mobile Version Of The Game Still Good?

With games like PlayerUnknown’s Battlegrounds (known as PUBG), Apex Legends, and Fortnite: Battle Royale being as popular as they are on PCs and consoles, it was only a matter of time before developers decided to launch them on mobile. Back in 2018, Epic Games took the gaming community by storm with its announcement that the Android, as well as the iOS version of its widely popular Battle Royale title Fortnite, is in development.

As expected, as soon as the news was made public, several prominent streamers, high-profile players, fans, and followers rushed to social media to express their excitement, eliciting many exciting reactions worldwide. Fast-forward to the present day, Fortnite Mobile is one of the most formidable names in the realm of gaming, boasting over a whopping 350 million players around the globe.

From being controlled on a touch screen to making certain alterations in the gameplay settings so that it can deliver the desired results on a smartphone, let’s take a look at some of the major features of Fortnite Mobile that makes it one of the top mobile games and is it still good or not.

Fortnite’s frame rate and graphics are significantly different than those on consoles and PCs. Although the title retained most of its qualities, such as quirky, cartoonish style, unique skins, and new maps, the graphics quality is considerably poor.

The game’s resolution has to be cut out to make it compatible with Android and other smartphones, so there are no shadows, no prominent reflection, and the maximum frame rate is 30FPS. Evidently, although the 30FPS frame rate is considered decent, players who have experienced Fortnite magic on other platforms can feel the difference and notice that gameplay quality is not up to the mark.

Despite the poor optimizations, mobile players can enjoy and experience the same features, elements, skins, and maps as the console and PC versions, giving it an upper hand over other mobile games. This means you can get more of an action-packed match which is crucial during gunfights or going head-on against enemies.

Fortnite Gameplay And Is The Game Still Good?

Now, for the most part, the gameplay of the mobile version of Fortnite is similar to that of other platforms. However, for a better user experience, developers have made certain changes to the interface and head-up display. Since sound experience plays an imperative role in gameplay, Epic Games has added plenty of visual cues to the game so that a player can perform well, even without headphones.

For instance, in PC and console versions of the title, players have to heavily depend upon the depth of the sound to pinpoint an enemy location, which automatically adds to the importance of sound in Fortnite.

However, for mobile players, the developers have added different cues to help locate the enemy and loot area since mobile gamers often play without headphones. The change has made a significant difference in gameplay between mobile and other platform experiences and helps with spatial awareness.

For example, as an opponent closes in on a player in the mobile edition, the game will display a little white indication pointing in the direction of the opponent and the footsteps from where they are coming from. The same is true with boxes and big treasures.

When a player is near the box, the indicator will point to the chest, making it relatively easy for gamers to find significant loot boxes and obtain a large quantity of treasure.

Number Of Players And Battle Pass

Primarily, Fortnite’s mobile version of the game follows the normal concept of any Battle Royale title, with 100 participants in one battle in each round. The game is usually played with each player alone or as a team of two to four players. However, there are many significant bonuses and prizes accessible without burning a hole in your pocket.

Players will need to have a Battle Pass if they want some cool character skins, new characters, gun skins, and other goodies. The Battle Pass is priced for 950V-Bucks, which is an in-game currency.

In order to buy the in-game currency for purchasing all the cosmetics and new characters, you will need to use real money and then unlock the Battle Pass from the in-game menu. The procedure is simply easy and convenient for beginners.

One of the biggest changes in the mobile version is the controls. Notably, the controls are majorly dependent on touch, so you need to work with the action of your figures to make the character move, jump, build walls, and, of course, shoot. Naturally, for a touch screen gameplay control, developers made certain twerks, with functions and placement of controls/buttons fully customizable. 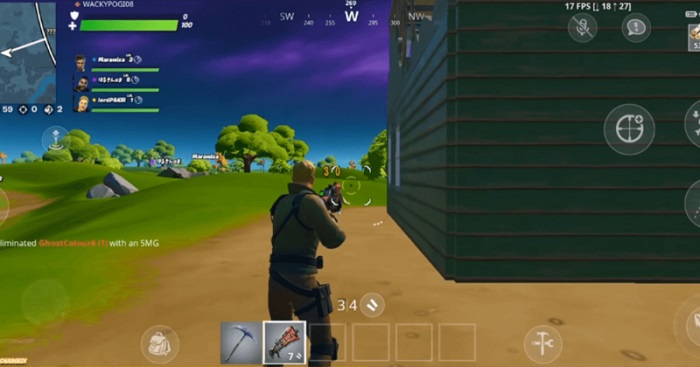 For beginners who are relatively new to mobile gaming, they might find the entire process of controlling a character with a figure movement a bit hectic, especially when it comes to aiming and shooting.

Although getting an accurate shot when the enemy is right in front of you is somehow manageable as compared to getting a headshot or if the enemy is constantly building walls to protect themselves.

Besides this, long-ranging shooting is comparatively tougher than hitting a close-range blow due to recoil control.

Fortnite’s mobile version still has a lot of work to do in terms of optimization and graphic quality. However, with Epic Games regularly releasing new updates and addressing various problems and loopholes with each release, Fortnite Mobile’s future seems bright, and it is definitely worth playing.

Amouranth Onlyfans Hacked? Everything You Need To Know

Amouranth, the controversial star of twitch and a celeb with a huge number of followers on Onlyfans, recently…
byAbhishek Singh

Since the debut of COD Warzone, the entire battle royal game mode has been a fan favorite for…
byAbhishek Singh

Apex Legends is here with new developments for the players. This includes a brand-new map called Broken Moon.…
byAyman Bhorania