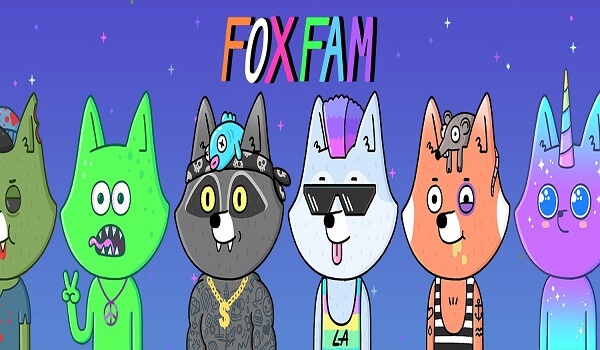 Home » NFTS » FoxFam NFT Collectibles # Everything You Must Know !!
by Sanjula Ahluwalia on October 11, 2021

With generative artwork quickly taking over the NFT ecosystem, you are surely inundated with choices if you wish to buy non-fungible artwork. FoxFam NFT Collectible series is a truly unique NFT collection with a range of 10,000 hand-drawn archetypes, each one a distinctive combination of diversified traits. The collection is the creative brainchild of seasoned artists and illustrators at the Yum Yum Studion.

The studio is famed for the creation of famous gaming projects and arty characters. Since each character in the collection is a combination of randomly put together traits, therefore, each one. Bears a unique persona. You can view the entire collection on the open sea platform and choose the one that speaks to you.

What Is The FoxFam NFT Collectible Series All About?

The FoxFam NFT Collectible series is a collection of a total of 10,000 collectible tokens that recorded as many as 2.9K sales as of October 10, 2021.

It is a passionately put-together project by a tenured team from the Yum Yum studio. Most of. The artworks in this collection are hand-drawn. Therefore, collectors have the option of purchasing a wide range of aesthetic and vibrant characters.

The possibility of more generative forms launching at a later stage can also not be ruled out.

About The Yum Yum Studio:

The Yum Yum Studio has a notable history of creating popular illustrations for some of the most successful brands in the business such as Xbox, Nickelodeon and Lyft.

The studio creates community-focused art. Each one of the illustrations is centred around a unique idea giving traders, collectors and art lovers a wide range to choose from.

The illustrators. Also have years of experience in designing merchandise such as making games, vinyl toys, trippy exhibitions and much more.

Each and every character in the series is created through pre-configured algorithms from a randomly generated combination of 12 traits. The traits differ in their rarity. The characters may also have certain super rare and distinct traits. Obviously, the rarer ones are going to be more expensive. From ghost-foxes to hybrid unicorn foxes to zombie-foxes, the collection is as interesting as it gets.

Each and every character in the series has distinct traits in their body, outfit, face and hat.

Minted on the Ethereum Blockchain, this collectible series is created from randomly selected hand-crafted images. Buying even a single token from the series will also give you exclusive access to communities, game items, ownership records for physical items and a lot more.

The FoxFam NFT project is set to launch in the second week of October. Visit the official website to get the exact launch date: www.foxfam.io

The FoxFam NFT project has met all the mileposts in its roadmap so far. Here are some of the most critical objectives in the long-term plan of the project:

The FoxFam NFT Collectible series has made as many as 2.9K sales so far.

The current floor price of the tokens is 0.328 ETH.

The current trade volume for the series is 2.4K ETH.

Must read:  Know Everything About Sandbox NFT Project

The overall volume of sales for the FoxFam collectable series is recorded at $7.92M.

The average price of one FoxFam NFT has been recorded at $1.1k.

The most expensive token in the FoxFam NFT Collectible series sold for $18k.

The least expensive sale was recorded below $401.

With utility in the gaming metaverse, these characters are 3-dimensional avatars that feature unique musical and visual traits. If you have been contemplating. About partaking in the NFT arena, the FoxFam NFT Collectible series can be a good project to start. Equally appealing for traders, investors and speculators, this series is among the shining paragons in the world of NFT collectables.

Opinions expressed here are solely the author’s and have not been reviewed, approved or otherwise endorsed by Appcraver.com. This article is educational material. As always, please do your own research prior to making any kind of investment.

Sanjula is an acclaimed Fintech journalist with a proven track record of publishing in the crypto industry. With a certification in Advanced Contract Law from Harvard, she is an avid commentator on the developments in financial markets. Her penetrating observations about crypto commerce reflect in her sharp speculative articles.