In a move towards sustainability, emerging company Voice has confirmed first environment friendly NFT platform being launched later in this month. Allowing a user to utilise credit card and not a cryptocurrency for buying, the service is carbon-neutral.

The NFT platform will enable content creators to demonstrate their works through the NFT Residency program. Non Fungible Tokens, a buzzword in the crypto space, works through blockchain technology and has significant environmental impact. The popularity of Non Fungible Tokens has zoomed as Marvel studios even came out with Spider-Man digital figures. 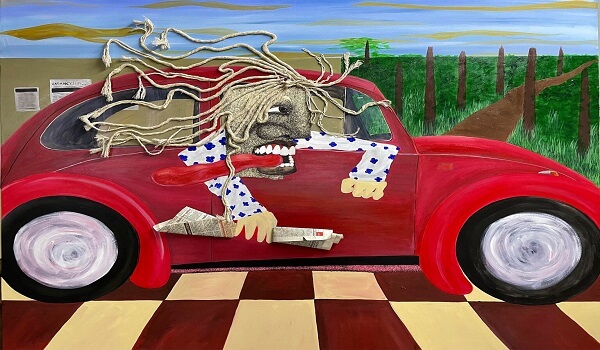 (Source: thisiscolossal)
For users, Voice is free to create service, avoiding fees for minting on platforms like Ethereum. The service is powered using Delegated proof of stake, an efficacious blockchain network not requiring giant server farms for solutions. This makes the company 17,000 times energy efficient than Ethereum and 65,000 times energy efficient than Bitcoin.  It is estimated that Ethereum is responsible for significant generation of CO2, almost 96,200,000 tons.

Beta app of the platform will be launch in the next few weeks and needs a person to be over 18 years of age for buying.
There have been instances of artists showcasing works through NFTs instead of international festivals, such as the French artist Joanie Lemercier, only to learn later on the carbon emissions of using blockchain.

At the beginning, the Voice NFT will include works from Chad Knight, Brittany Kaiser, Alexander Gilkes, Azu Nwagbogu and Kimberly Drew. The novel release will have ‘Raise Our Voice’ as the theme empowering creators to demonstrate talents through NFTs.

Another creative professional, Photographer Misan Harriman is one of the curators partnering in the initiative by Voice as he believes that that digital art and worth of digital art is similar to physical art. Harriman loves the idea of NFTs enabling digital artists to have a voice and believes there is tremendous potential in NFTs ensuring talent is recognised equally.

Kimberly Drew, writer, curator and an activist, said that it is an honour to dedicate the summer to delve deeper into NFTs alongside amazing artists, curators and technologists. Residents work with Voice technology platform for launching NFTs and inform vital parts of Voice platform for launch.

Another artists Ayanfe Olarinde, a self-trained visual artist of Nigeria, explores identity formation, self-image, mental health, gender construct amongst others. The collaborative works would be released on Voice platform later along with 50 more artists globally.

Voice, an emerging rival to Twitter, is novel due to tokens pertaining to an issue in lieu of participation and also driving visibility and content popularity on the platform. Prominent tech-world leaders like Evan Blass and Steve Hemmerstoffer have made a transition to the platform. The firm has claimed that EOSIO blockchain as well as unique qualities will mitigate carbon emissions from the new systems even as ownership will be enhanced.

How To Buy Doggies NFT By Snoop Dogg From Opensea » Important Guide !

Snoop Dogg has come up with a new collection of 10000 Doggies NFT avatars, revolutionising the gaming industry.…
byMelwin Philip