Backed by a team of seasoned developers and creators, the game is poised to emerge as a remunerative project. Buyers are advised to proceed with caution while purchasing or selling NFTs as the market is still in a premature phase fraught with many scams and malpractices. Read on to know more about how and where you can buy these remarkable UUnicorns NFT tokens.

What are Uninterested Unicorns?UUnicorns NFT Collectibles 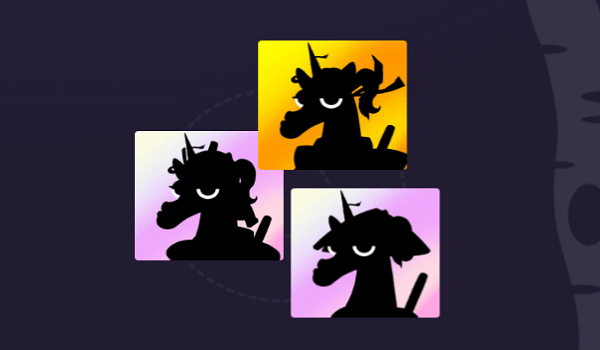 Uninterested unicorns are unique digital Collectible items that can be retained for greater future rewards, traded, and even used on the Unicorns metaverse. The uninterested futuristic series of Non-Fungible Tokens are based on the Ethereum Blockchain Network.

Part of a broader Metaverse that is still under development, these digital collectibles will find multiple use cases in the gaming ecosystem. Quite contrary to their name, the timeline of the development lifecycle of these NFTs has been astonishingly interesting.

In August 2021, the team launched 800 Ascended Unicorns membership tokens to early Discord supporters. In the past month, the company released several finalized sneak peeks and has also launched the pre-sale for Ascended Unicorns. In the second week of September, the company launched its public sale. If you have been seeking to invest in crypto assets, this is a great time to start trading.

Robust projects powered by good teams present a great opportunity for investors to explore the crypto landscape. Uninterested Unicorns is a secure and scalable project that promises sizeable rewards for early entrants. The Official release of the whitepaper is scheduled in the month of October when the native token the $UCD will also become tradable on major decentralized exchanges. The gaming metaverse model has also entered its pre-production stage. Further, the company harbours plans to launch its 1st exclusive Uninterested Unicorns physical merch drop. It will be payable with the native $UCD token. 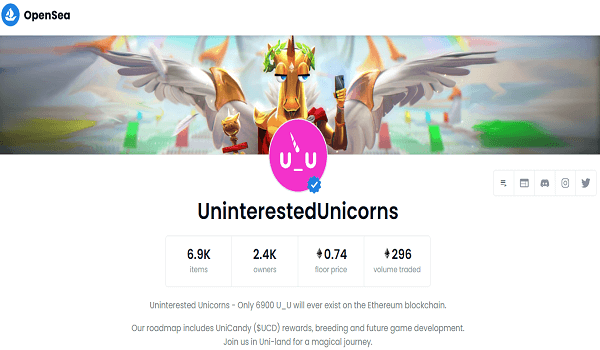 The company also plans to raise its first round of seed funding in November 2021. To know more about the project stay tuned for the white paper coming soon. You can also check out the complete collection of the Uninterested Unicorns on opensea here: https://opensea.io/collection/ununicornsofficial
Backed by the expertise of serial entrepreneurs and a development team consisting of tenured creators, designs, and artists, the Uninterested Unicorns could go on to define blockchain-based gaming in the future. 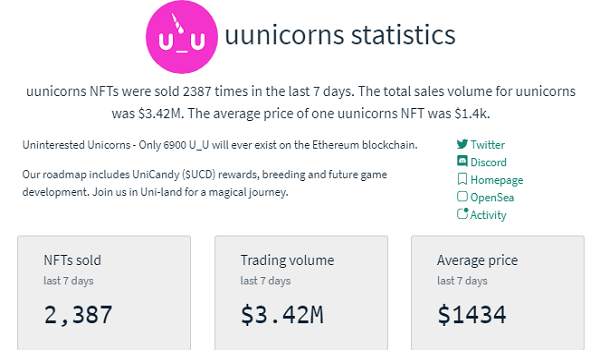 If you are considering purchasing these unique collectibles, you can buy them from the Opensea marketplace. The tokens will also soon be listed on other major Decentralized exchanges. In the true spirit of decentralization, these NFTs will be sold on decentralized platforms powered by robust smart contracts to ensure the secure transfer of assets.

What Is The Price Of The Uninterested Unicorn tokens?

As of now, the prices of the Uninterested Unicorn tokens range between $293 and $144K. The prices of these tokens have shown remarkable agility even in a relatively volatile NFT market.

The NFT marketplace is rapidly unfolding globally. However, it is still an emerging ecosystem. Therefore, to accurately estimate the fate of a project, it is important to take into account the multifaceted features of the project, its unique selling points, and most importantly the team. professionals involved in its development.

Powered by the Ethereum Blockchain, it will be a truly decentralized and sustainable offering. With a team of eminent advisors and strategists, the project is among the most futuristic blockchain-based gaming protocols out there. With the backing of seasoned creators and serial entrepreneurs, the Uninterested Unicorns project is poised to meet all significant milestones on its development roadmap with consistency. In line with its vision to provide users with sustained value, the project could go on to set high standards of efficiency and performance while providing its liquidity providers with sizeable returns.

Author
Melwin Philip
Melwin Philip is a FinTech specialist, a market analyst, and an investor. His investment strategy entails performing a valuation assessment and conducting technical analysis on financial and technology firms. He's passionate about stocks, forex, crypto, blockchain, and digital assets. He keeps a close eye on industry trends and provides insight into beginner-friendly platforms.

Shiboshis NFT » Everything About Official NFTs Of Shiba Inu!!

Are you trying to search for a brief and comprehensive review of Shiboshis NFT? Finally, you have located…
byVarun Mohil

Zed Run NFT » Everything You Must Know About Zed Run Ecosystem

What does the Zed Run NFT collection encompass? Well, it comprises unique digital racehorses that enable you to…
byArchana Shivkumar