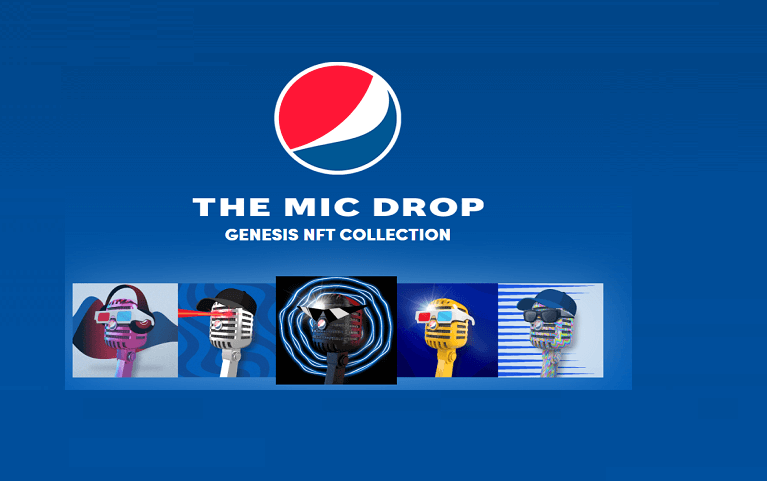 Pepsi Mic Drop NFT, an era-defining time-honored phenomenon, has stepped foot into the future. With several competitors, worldwide reach, it was inevitable that NFTs waft away coalescing with the Pepsi atmosphere. The Pepsi Mic Drop NFT is a token of reminiscence towards Pepsi’s past. The Pepsi Mic Drop NFT strives to celebrate pop culture, it’s crisscross with Music over the years, and the time when Pepsi was invented.

Does the Pepsi Mic Drop NFT have any real world use-case? And what makes it special? Keeping these questions ajar, let’s enter into the warm world of NFTs!

Pepsi Mic Drop NFT : A Mic Drop In The World Of NFTs

Seeking asylum on the Ethereum Blockchain, the Pepsi Mic Drop NFT brings forth unique caricatures with a hint of the classic deep blues and red of the Pepsi logo. Pepsi was born in the year 1,893. Hence to tie in meaning to the Pepsi Mic Drop NFT, they’ve put out a total of 1,893 collectibles. It is so intricate that it spreads over 50 different attributes, making each NFT unique. With differentiating parameters like the backdrop, microphones, and the stage.

The purpose of Pepsi Mic Drop NFTs is to pay homage to the collaboration between the pop realm and the Pepsi business. Their official website calls this the ‘Mic drop’ event in all of NFT history. Pepsi Mic Drop NFT is all about the numbers, from the total number of items to the jarring Mint Price of them all, let’s see how it goes!

Pepsi Mic Drop NFT : Numbers On The Blockchain, What’s There To Lose And What’s To Gain? The Money.

Well, how to buy the Pepsi Mic Drop NFT? Here’s how the story goes: On December 10, 2021, Pepsi hopped onto its Twitter, with a link. The link bridged a form to everyone. And they announced that the first 1,893 people to fill the details, would embed them into the waitlist. Four days later, on 14 December 2021, the Pepsi Mic Drop NFT was launched officially. And the waitlist was released too, this dazzling mannerism, caused much excitement amongst the community.

Each person on the waitlist gets the opportunity to Mint one Pepsi Mic Drop NFT. Their official NFT website allows the user to connect their Metamask Wallet to it. For the ones on the waitlist, their addresses were already mapped and they have displayed a button on the website which said: MINT. Although, what sets Pepsi Mic Drop NFT apart from maximal NFT projects, is the Mint Price itself.

As officially announced by Pepsi, the Pepsi Mic Drop NFT Mint price was a conclusive zero. The NFTs were essentially free. Only the gas fees (the fees to complete a transaction) needed to be paid, then the NFT would show up in the connected Metamask Wallet.

Once the serendipitous person shows up on the waitlist, they get 96 hours to Mint the Pepsi Mic Drop NFT. And within this interwoven webbing of numbers, Pepsi also kept 50 NFTs aside in order to keep surprises. Thus making the Pepsi Mic Drop NFT price being rare, and not to be seen with other projects.

With an average price of about 1 ETH, it is difficult to deduce when it comes to the Pepsi Mic Drop NFT Price Prediction. The number of sales has decreased by 33% in mere two days from 18th to the 20th of December. And since all the Pepsi Mic Drop NFTs are pre-owned, all of them are set for the auction, rather than directly bought.

According to the website, there are 6 attributes that mutate amongst each other and form up to 50 different unique styles. And hence, there needed a scale to balance the Rarity. With the green light of the rarity tools website, where the Pepsi Mic Drop NFTs are to go live soon, the Rarity distribution was as follows:

These Mics present Pepsi Mic Drop NFTs, that one can hear via its visual design, and they seem to be promising additions to one’s Digital Wallet. The community welcomed Pepsi Mic Drop NFT with open arms and Open Sea. In spite of them being mere collectibles, it has seen a rampant rise in the Market. Such is the story of the Pepsi Mic Drop NFT.

Taman Bachani is Final Year Grad Student in the field of Biomedical Engineering. His moxie towards self-learning led him along a path to code. Whilst exploring passion, and ambition, he stumbled upon Blockchain Tech. He loves asking questions about How and Why and brings the same curiosity within the warm world of Web3. Entrepreneurial dreams make him want to research, ponder, and write about new-age Tech, from the Metaverse to Autonomous Vehicles, and of course, NFTs!