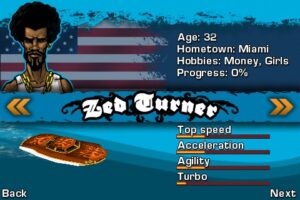 If you are looking for a racing game that escapes the mold of similar ones found at the App Store, then give Powerboat Challenge 3D a try. Instead of racing through streets, take a powerboat through rivers in a challenging course against other opponents.
Unlike a lot of other games, this racing app offers a tutorial feature to get you accustomed to the gameplay. It is a nice option, but it was a bit overly scripted. Powerboat Challenge 3D stopped you about every three seconds to fill the screen with a paragraph of instructions. Eventually I got tired of the interruptions and started looking for a way to exit out of the instructions and just start playing the game — my usual method of tutorial: trial and error.
When it’s time to choose your characters, you have four interestingly dressed and named choices. Each come with a different boat and levels of strength. It would be a good idea to play around with a few different drivers to find out which one is your preference.
Powerboat Challenge 3D is fairly challenging in the beginning, which is not necessarily the norm for most App Store games. The reason for this is how you must race. The powerboat must weave around a series of buoys in the river. The more successful you are at doing this, the faster the boat will speed up. This can be gauged by the turbo meter located at the bottom of the screen. Combine that with trying to beat your three opponents, and you have a recipe for some addicting fun.
Powerboat Challenge 3D is a game that conceivably could get better over time with updates. A series of new characters and race courses would make it even more challenging and the type of game that players would come back to.