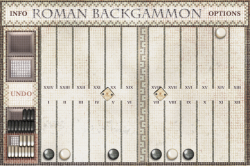 Apparently the classic board game known as backgammon is rooted in Roman history – who knew? The developers at EOZ Games surely did and they have developed a version for iOS in an effort to capture the game at its earliest best. Roman Backgammon is a simpler, older version of the game featuring all the goodies you’d expect of an iOS rendition of a board game, including Game Center support (for iOS 5 users) and a variety of multi-player options.
If you enjoy Backgammon, Roman Backgammon isn’t exactly the same game as what you’re likely used to, but has may similarities. Even if you don’t have a clue how to play, the included tutorial is thorough enough to get you going. There are three options for playing. The first is to create and accept challenges through Game Center. The second is to skip online play and play a game with a friend by passing and playing. If you prefer to play alone, play against the CPU player. There are other options to enhance the experience as well, including choosing your difficulty level and playing your own tunes in the background.
As far as board games for iOS, Roman Backgammon is a nice fit. The interface is simple – you can either tap and tap or tap and drag to move your pieces. There’s no need to select a method ahead of time, just use what feels natural. For beginners, a “show moves” option is available that highlights the parts of the board where legal moves can be made. In terms of appearance, it has an “old world” feel that seems more than suitable and the dice roll feels (and sounds) real enough.
Overall, Roman Backgammon is designed for beginners and gurus alike. Depending on how competitive you are, you might want play a CPU game or two just to get a feel for it before jumping on Game Center and playing against real opponents. But no matter which multi-player option you choose or even if you just go it alone, this version of the game is so easy to pick up on, you won’t feel lost.
Roman Backgammon is $2.99 for iPhone or iPad, which is less than picking up a board elsewhere and far easier to take along on the go. It plays smoothly and satisfies the desire to engage in a board game and is a great way to introduce new players to this classic (more like ancient) game of strategy, skill and luck.