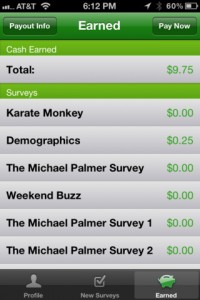 Everyday there are more new and interesting ways to make money online. If you are an iOS user looking to make some extra cash on the side without having to invest much of your time, then Surveys On The Go is the app for you.
The app is part of the growing survey industry, which pays consumers a small fee for taking part in short surveys.
Online survey taking has become a huge market, with new companies springing up on the internet every day. Surveys On The Go takes advantage of the growing trend and allows users to take surveys directly from their iOS devices, and will pay anywhere from $0.25 cents all the way up to $5 dollars for a survey.
Surveys On The Go is easy to use. All you have to do is sign up for an account and the app will begin sending push notifications to your iOS devices whenever a survey is available to take.
After you create an account with Surveys On The Go, there will be six quick surveys waiting for you to complete. The Survey’s pay $0.25 cents and serve the duel purpose of getting you familiar with the survey taking process as well as help to indentify survey’s that you maybe be eligible for based on your interest and expertise.
The first six surveys that you will take with Surveys On The Go pay a grand total of $1.50, and are on the topics of: interest, household, ideology, demographics, entertainment and technology. The surveys are short and don’t take more than a couple of minutes to complete.
Once you have taken $10 dollars worth of surveys, you can request to cash out your money, and Surveys On The Go will credit your PayPal account.
The only issue I had with Surveys On The Go was the amount of surveys available to take. After the initial six I took, there were no other surveys available for m. I have had the app for a week and have not been offered any other surveys. The lack of survey opportunities may simply be because the app is new and still in the process of growing. I suspect that as more people that sign up for the app, more surveys will be available.
Surveys On The Go is an great way to earn some extra spending cash. You might not become rich using the app, but if you can use it to buy yourself some coffee a couple of times a month then you come out a head. Overall, I recommend the app.