Stitcher Radio Excels as a Discovery Engine for Internet Radio Enthusiasts
Rated 4.5/5 by Barbara Holbrook
Stitcher Radio excels as a discovery engine. The app encourages exploration with channels that highlight the best Internet radio programs and podcasts.
category: Best Free Apps, Editor’s Picks, News
TuneIn Radio for iPhone Makes the A-List
Rated 4.0/5 by Jennifer Beam
With so many radio apps to choose from, how can you pick just one? Well in short you probably can’t, but depending on how and what you want to listen to TuneIn Radio may be ideal. Similar to SparkRadio and comparatively priced, TuneIn Radio features many (not all) stations from around the world.
category: Editor’s Picks, Internet radio, Music
Spark Radio Price Drop Should Spark Interest
Rated 4.0/5 by Jennifer Beam
Leveraging the world-wide reach of Radio.com, Spark Radio by Handcast Media Labs puts thousands of radio stations at your iPhone fingertip and streams them over Wi-Fi or 3G. Spark Radio has been available for several months and has undergone a bit of a price drop in that time.
category: Editor’s Picks, Internet radio, Music

Emergency Radio Vs. Police Scanner: Cops Unedited
Rated 0.0/5 by Keith Lewis
1 Adam 12 see the woman at 1242 Hauser St. prowler complaint. Handle this call code 2;
And so began my fascination with police shows and police radio jargon. Shortly thereafter I was listening intently to my father’s police scanner of the happenings all over southern California.
category: App Guides, Entertainment, Utilities
Slacker Radio Competes with Pandora
Rated 4.5/5 by Amelia Sauter
I used Slacker Radio for the first time today, and I was impressed. Slacker Radio is a free custom internet radio app developed by Slacker, Inc. that provides some extra perks that its main competitor, Pandora, does not.
Slacker Radio offers the same basic features as Pandora.
category: Best Free Apps, Editor’s Picks, Internet radio
I Heart iheartradio! Listen to Radio on the iPhone and iPad
Rated 4.0/5 by Amelia Sauter
iheart radio – Being a small town girl, I am not too familiar with Clear Channel Broadcasting. I remember the Howard Stern controversies – who doesn’t – but Clear Channel has otherwise not frequently touched my sheltered ears. Their iPhone app, iheart radio, has changed that.
category: Best Free Apps, Editor’s Picks, Internet radio, Music
FlyCast – Surf the Web While You Listen to Your Tunes
Rated 3.5/5 by Neal Hamou
The developers of FlyCast held nothing back when they released their music broadcasting app. Since its release to the App Store, FlyCast has generated quite a few comments, and it seems most everybody liked the app.
category: Best Free Apps, Internet radio
Interview with Gregg Geil from TourDataBase, developers of iFestival
Rated 0.0/5 by Barbara Holbrook
AppCraver recently had the chance to chat with Gregg Geil from TourDataBase.com, the developers of iFestival. He answered 10 questions about developing apps for the iPhone and iPod Touch.
category: Interviews
Interview with Colin Billings of Stitcher
Rated 0.0/5 by Barbara Holbrook
AppCraver caught up recently with Colin Billings, Director of User Acquisition & Experience at Stitcher, Inc, the San Francisco-based team that developed the Stitcher radio application for the iPhone.
category: Interviews
AOL Radio is Free, but Limited
Rated 2.5/5 by Fred Krueger
If there was no competition, I would be tempted to recommend AOL Radio, the free internet Radio compilation app from America On Line. The app has one huge thing going for it — the price (Free). But its hardly the best Internet radio app out there.
category: Music 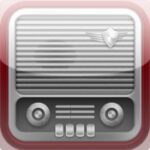