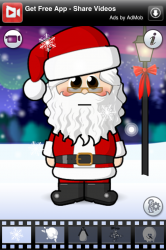 With just a few days left in the big countdown, Santa has already come to town and paid a visit to the App Store in the form of a WeeMee. Talking Santa by WeeWorld, makers of the WeeMee Avatar Creator, is an app that combines a Santa avatar with different animations, backgrounds, and playback voice selection. Though Talking Santa doesn’t do much, it makes for a nice entertaining app for kids to play around with just in time for Christmas.
The primary features of Talking Santa include automatic voice recording and playback. Just talk to Santa and he’ll repeat whatever you say. His voice can be altered with a selection of six different voices ranging from chipmunk high to super deep. There are nine wintery Christmas backgrounds to choose from and two animations are included. (Bonus animations can be purchased separately). Talking Santa also has a recording feature for creating short videos of Santa to save or share. User created videos are currently being uploaded to You Tube and shared via the WeeWorld website.
While there’s little point to having an interactive Santa avatar beyond the 25 days of Christmas, Talking Santa is a slick little app with a modicum of entertainment value. The smallest of critics are likely to be the tween-age group who are moderately obsessed with avatar creations in the first place and never tire of hearing themselves talk or poking at a virtual Santa Claus to make him laugh, fart, burp or vomit. Nonetheless, regardless of age or maturity level, Talking Santa is still poised for a bit of a holly jolly fun – especially if you’re creative.
Talking Santa has the ability to save recorded video or share via You Tube, Facebook or email. The available recording time is about a minute, but quick and clever users could easily create an animated video message to share with friends and family. The two included animations involve falling snowflakes and flinging snowballs, but a .99 in-app purchase will give access to the remaining three animations, which include mistletoe and a carrot nose, as well as remove the ad banner at the top of the screen.
There’s very little to Talking Santa aside from a parroting Kris Kringle, a few zany interactions and of course the video feature, but for a free holiday entertainment app it still scores pretty high on the nice list.

Enjoy a bit of holiday cheer with the Talking Santa WeeMee demo video.