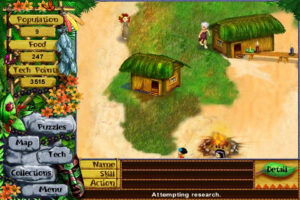 Virtual Villagers 2: The Lost Children is the type of game you open just to mess with for a few minutes…and look up an hour later wondering what happened. At least, that’s how it’s been for me. This Sims-style game from Last Day of Work allows players to help sustain a small group of villagers on a remote tropical island. You can help the islanders develop useful skills, explore their surroundings and even encourage them to sustain (and increase!) the population by having babies!
Virtual Villagers 2: The Lost Children is rather complex, and I highly recommend turning on the tutorial tips when you begin playing (you’ll be asked if you want them when you start the game). The tutorial period is relatively brief, but informative, and trust me, you’ll want to be informed. While the Virtual Villagers is fun, not everything is completely intuitive, so the tutorial should get you off to a decent start.
The game controls are pretty easy — you simply drag and drop villagers where you want them to go. As the Virtual Villagers 2 progresses, there are more options for actions. Adults can learn to build, heal, farm, cook and a plethora of other activities. While children don’t work, they are the only ones who can spot and collect various little baubles and special items around the island, so everyone in Virtual Villagers 2 has something to contribute.
One of the interesting features of Virtual Villagers 2: The Lost Children is that the game is in “real-time”; even when you don’t have the game open on your iPhone/iPod touch, your little villagers are still living life, eating, working, etc. So while you don’t have to have the game open 24/7, you probably will want to check in at least somewhat frequently so that you don’t open the game one day to find that all of your little minions have died of starvation!
Overall, I think Virtual Villagers 2: The Lost Children is a pretty impressive game. The graphics are terrific and it seems as if it’s the sort of game that will provide many hours of entertainment. However, it’s not without its faults, and the biggest problem is that 95% of the time, it crashes when I open it. Usually if I re-open it a second time it’ll work, and once the game is running I haven’t had any crashes, but the crash upon opening it gets old, quickly. With any luck, this bug will be resolved soon and it won’t be an issue any longer.
While there’s no free or “lite” version of Virtual Villagers 2: The Lost Children for iPhone, there are PC and Mac trial versions available at the Last Day of Work website.