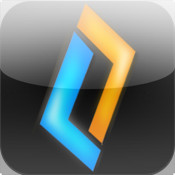 Intrigued by clever puzzle games that offer something unique and challenging? Vortex–The Escape fits the bill for unique. A clever puzzle game that plays like a platformer, Vortex–The Escape features 50 levels of portal placement challenges.
The objective is to help ENDR the robot navigate his way through the robot testing grounds in an effort to prove he’s more useful than a toaster and save him from being reassigned to the janitorial department. The storyline is well-laid out, but isn’t important as the real point is made by the design of a mixed-genre, free-style puzzle game.
The melding of an action platformer with a puzzle game is one of the unique aspects of Vortex. Little ENDR needs to navigate his way to each level’s exit by placing portals, which he shoots out of his robot arm. With proper placement, he enters one and exits the other to land near the exit and advance to the next level. While there are often some obvious solutions to attaining an exit path, there is no single right or wrong solution for any level. This kind of free-style play is one of the high points of Vortex – The Escape.
ENDR the robot has four abilities controlled with the touch screen control pads. He can move left/right, jump, adjust the trajectory of his arm and shoot portal beams. Players have the ability to zoom in and out on each level screen to get the “big picture” and if the portal placements don’t go quite as planned, just shoot a new one to reset the escape route. The combination of trajectory and portal blasting, along with testing the controlled movement abilities of ENDR makes the game all the more clever and unique. Unfortunately, there are a few minor issues that keep the game from its full potential.
To begin with, there is quite the learning curve in terms of interface. The included tutorial on the beginning level is helpful, but might need to be observed more than once. The learning curve is not a hurdle on its own, but combined with the slightly awkward placement of control buttons it lacks the cohesive, intuitive feel that fosters addictive gameplay. Though compatible with iPhone, iPod Touch and iPad, the controls are even more awkward on the iPad, so reserve this one for the smaller screen. No single element of the game’s controls, responsiveness or interface is particularly destructive to overall enjoyment, but one can’t help feel there is a fuller potential that could have been reached – perhaps with just a few tweaks.
Ultimately, Vortex – The Escape is a game built on a solid foundation and does offer a truly unique and fun concept that isn’t often replicated. There are a few elements lost in translation, but not so much to ruin the intended effect of the game. Though there is obvious room for improvement, Vortex-The Escape remains an entertaining mobile game and an interesting challenge for puzzle fans.