The Australian award-winning game development studio Frosch Media, today announced their first-of-a-kind skateboarding game, Skater has launched on the iOS App Store for iPhone and iPod touch. Focusing on the most fun aspects of actual skating, and introducing a unique new cloud-based social interaction feature at its center, Skater offers an endless stream of user-generated content that can be explored in open-world gameplay environments – set in the most authentic virtual versions of real-world skate parks ever seen in a game.
Skater, which started gathering industry attention under the title Touch Skate when still in development last year, brings a clever social interaction twist to the genre, allowing players to create their own trick runs and storing them in the cloud, so that others can copy and improve on them. The line between single and multiplayer experiences is blurred unlike in any other previous skating game, enabling players to save their favorite trick runs and share them with the world. In turn, they get to discover and copy runs that others have created – giving them access to a seemingly endless number of new ideas to explore.
“We wanted to make a game that captures some of the experience of skateboarding itself,” said Dain Hedgpeth, Director for Frosch Media, who likens the game to taking part in the world’s biggest online skate session. “Skater celebrates style and individuality, knowing that different people see different things in a spot and skate it in their own unique way. Enabling players to tap into and contribute to an infinite pool of trick runs from around the world makes for a truly unique experience, and we really can’t wait to see all the cool ideas people will come up with!”
Gameplay takes place in iconic skate parks and street spots, such as Stoner Park, Woodward Plaza, The Berrics, Carlsbad Gap and Hollywood High. Frosch Media, who say that more spots are already in the works, have recreated these legendary spots faithfully, even down to stickers, graffiti and street signs – all based on architectural plans, height maps and photos taken on-site. Besides these famous skate parks, the skaters and developers behind the game have also teamed up with industry leading gear brands, including etnies, Lakai, eS, Emerica, Zero, Toy Machine, Foundation, Baker, Deathwish, Shake Junt, Bro Style, Pig Wheels, Sptifire, Thunder and Venture.
Players control their board and shoes in a very direct way that is easy to pick up and makes ideal use of the touch screen, allowing Skater to capture the flow and feel of skating more than any other game for the current generation of devices. This also allows Skater to be the first touch-based skating game to include the full range of street tricks, including tricks with body spins such as 360s and big flips – which can be used in combination with manuals, nose manuals and every kind of grind and slide.
With its simple-to-pick-up controls, authentic spots and gear, organic gameplay and its unique social engagement element, which provides an easy way for players to continuously highlight and find new things to do in each location, Skater makes for an easy buy not just for skateboarders, but for anybody enjoying good mobile games.
Skater 1.3 is $4.99 USD (or equivalent amount in other currencies) and available worldwide exclusively through the App Store in the Games category. 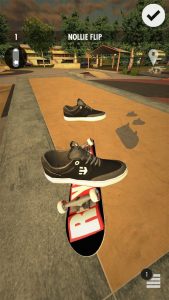 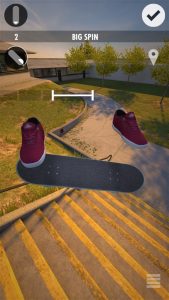 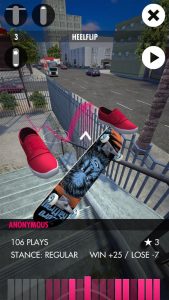 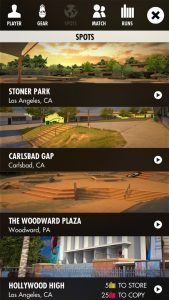