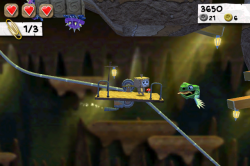 Cresent Moon Game’s latest release Paper Monsters has received some serious accolades and if you pick it up in search of an entertaining platform adventure game, you’ll discover why. Paper Monsters is pretty, poignant and pleasurable. The environment is vibrant and the gameplay is rich with a premise that feels both familiar and brand new. Paper Monsters stars an unidentified little cardboard box guy with big personality who merrily plods along through 16 levels of tough “Paper Land” terrain wrought with dangerous origami enemies. His mission of course is to save Paper Land and become the cardboard hero.
Paper Monsters has all the elements you would expect in a side-scrolling platform adventure. Our cardboard hero fights enemies, navigates difficult surroundings and collects items all while trying to avoid his own demise. Paper Monsters may not be a jackpot of new ideas, but rather than merely being a copycat of existing games, it takes tried and true concepts and breathes new life into them. From the visually appealing backgrounds constructed of virtual paper, cotton balls and other “pretty” stuff to the upbeat, original soundtrack, Paper Monsters makes it easy to immerse yourself in the gameplay.
Paper Monsters features the classic joystick and button type controls, which are sensibly hidden by default to avoid obstructing the graphics and are positioned intuitively under the spots for the left and right thumbs. The very first level demonstrates the functions of the controls and how to play the game, making it easy enough to get going. In addition to fighting off the paper bad guys, players look for bonus paperclips and collect buttons, while keeping an eye on little cardboard box guy’s health meter, which runs only three hearts deep. Health hearts to replenish the meter are also hidden throughout the level and are revealed by opening boxes found along the way.
The environment is 3D and cardboard box guy navigates the fore and background environments via tunnels. Occasionally the foreground environment interferes with the view of the background environment, but never for too long and the navigation route is always visible. As you progress through each of the levels, progress becomes just a touch more challenging. Completing four levels will complete a chapter and the first chapter must be completed to unlock the bonus and seasonal games – Drag n Dash and Heartbreak Shakedown. When all four chapters are completed, it feels a bit sad that cardboard box guy’s adventure is over, but the bonus games add a bit of replay value to soften the blow.
As a platform adventure game, Paper Monsters is as rich as any designed for a bigger platform, packing the same punch into the smaller screens of the iPhone, iPad and Touch. A truly entertaining little adventure game with all the right elements and an immensely pleasing design, Paper Monsters is a definite winner.