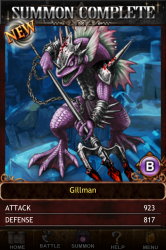 At its core, Dark Summoner is a social online game that allows players to battle against each other with monsters in a dark fantasy world. It features there guilds at war who receive certain bonus depending on the type of monster. They include the Guild of Sin who receive bonus for impulse type monsters that specialize in attack, Guild of Rancor who receive it for covert type monsters that specialize in health and Guild of Tyranny who receive it for psycho type monsters that specialize in defense. This creates a great deal of strategy involved in climbing the ranks.
What sets Dark Summoner apart is its exceptional attention to artistic detail. Each monster is a graphic masterpiece that demands respect from all that come forth to endure the dark fantasy world. The company collaborated with well-known illustrators to make this possible. Even the game’s first cut scene features professional CG-type movie output. The monster seems as if it is going to pop out of the screen and make you join the war in real life.
Beyond its twisted and downright diabolical artwork, Dark Summoner is a game of strategy that takes quite a bit of time to build up. However, it doesn’t take too much time to get hooked as from the start you are treated to the aforementioned artistry and smart game mechanics that give you a reason to come back and play. The only problem I ran across was that when I received a call I had to reopen the app and have everything load again. The app also requires a constant internet connection so based on your reception, it could load slowly sometimes. I didn’t find that to be a problem.
What’s cool about this game is that instead of trying to build up one monster’s abilities one mission or fight at a time, you can sacrifice smaller monsters and use their power to build up others into fierce fighting machines. This is a welcomed approach to increasing the player’s powers as waiting to me is not a virtue.
In this game, and just like in most of these types of games, creating allies is necessary to building up your army of monsters and defeating others. It basically doubles or triples your powers and makes taking on those nightmarish monster foes much easier. This aspect of the game combined with the visually stunning artwork makes Dark Summoner an easy download for those who aren’t scared of the dark or hours of fantasy gameplay.