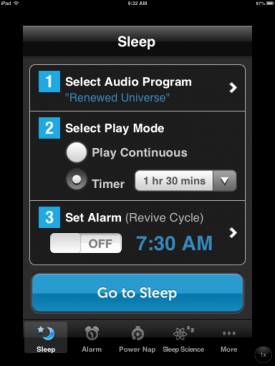 Insomniacs flocking to the App Store for white noise, bedtime symphonies and other apps that promote sleep might take an interest in Sleep Genius: Natural Health. An app with some scientific principles applied to its development, Sleep Genius lays claim to being rooted in NASA research that purports to train the brain into its natural sleep rhythms. It features three modes – sleep, alarm and power nap – and promises to be effective enough to do away with other sleep aids for a natural kick-start to a good night’s sleep.
The scientific principles behind Sleep Genius may be based in neuroscience, but in layman’s terms it is a combination of sounds and rhythms that help the brain signal the body to sleep. The theory is that white noise alone has zero effect on the brain, but that a carefully engineered combination of rhythmic sounds and music has the desired effect. With Sleep Genius, this combination of sound and rhythm is presented in an easy to use app that lets you select a program and a play mode that works for you.
Sleep Genius has one program built in and two additional programs that can be purchased in-app. The play mode options include continuous play or a sleep timer option. The optional alarm feature, a.k.a. “Revive Cycle,” is an alarm that gradually and gently induces the waking cycle without blaring sounds that interrupt sleep abruptly, causing a rise in blood pressure and heart rate. The additional power nap mode is a shortened program of precisely 29 minutes with the revive cycle built in, designed to promote a quick, but refreshing power nap.
Unless you’re a neuroscientist or sleep expert, it’s impossible to comment on the actual scientific principles with any founding knowledge, but the theories seem sound enough. Sleep Genius offers more than a white noise sound board as the programs are built specifically for the sleep cycle, but unfortunately, it’s impossible to know if it works for an individual without trying it first. It does provide a very soothing, melodic background for sleep that can easily be identified as relaxing at least. The playback quality without speakers is a bit unstable, making the desired volume a bit hard to determine, but the app works with traditional audio speakers as well as Bluetooth.
Sleep Genius: Natural Health is available as an iPhone app and the same developer also has a version designed just for baby. The Sleep Genius mantra is “Sleep Faster, Sleep Better, Awake Happier” – an achievement just about anybody could appreciate. The initial investment for either Sleep Genius or Sleep Genius Baby is $4.99 and the additional programs are $2.99 each.