Test Your Puzzle Logic with Boxed In 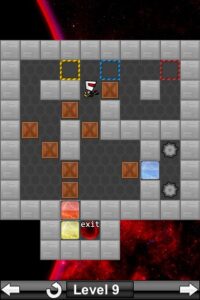 Boxed In is a new logic based puzzle available in the App Store that pretty much encompasses all that a logic puzzle should be. Boxed In has increasingly difficult levels with a simple objective made challenging by specific rules of limitation.
With Boxed In you get 50 levels that feature a quirky little robot that must collect cog wheels before exiting each level. You control the robot, who is limited to only pushing, not pulling, the boxes that stand in his way. Maneuvering around the puzzle board, players have to use the boxes to toggle switches that disengage force fields blocking the way while still collecting all the wheels.
When it comes to logic puzzles, I prefer a nice balance of challenge with minimal frustration. I rather enjoy those “aha!” moments when I stretch my logic just a bit to solve the challenge before me and I want a game that works with me, not against. Boxed In provides that balance of challenge with minimal frustration. Though there are a few things I think are missing, I found Boxed In to have longevity as far as game play and entertainment. In fact, as I settled down to play, it definitely sucked me in.
To control the Boxed In robot, you simply swipe up, down, or across on your iPhone screen to designate directional movement. This method of control is fairly intuitive and only causes minimal interference. Once in a while, an accidental touch causes an unintended move and occasionally the swipe controls become arduous in some levels, but overall work fairly well for the general design of Boxed In.
The levels in Boxed In become increasingly more difficult to solve, though the first few are pretty simple. This is good though, because it gives you a chance to become familiar with the game without being intimidated. I was actually surprised at how challenging the levels became after making my way past the first ten or so. There is a restart level button included to quickly start over if you get stuck, but an undo last move option is absent and should be included both for the sake of the puzzle and for correcting unintended moves.
Boxed in has an auto-save feature and you can scroll through to replay previous levels or advance to subsequent levels if a particular level stumps you. Boxed In also records solved levels with a green check mark in the upper right corner and lets you play music from your library.
Boxed In is similar in nature to Theseus, which I also found to be a great logic based puzzle. If you like the challenge of solving a puzzle that tests your logic against limitations, then definitely check out Boxed In. It certainly isn’t flashy or detailed, but it serves its intended purpose quite well.