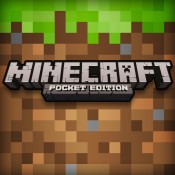 Fans of one of the most popular sandbox games of all time can now enjoy the building experience on the go. Minecraft – Pocket Edition is the iOS version of the game that first won creative kudos on the computer, then jumped to iOS and Xbox. While not nearly as extensive as the PC version, Minecraft – Pocket Edition is the original and accepting a knock-off could prove disappointing. Just like the parent game, iOS players can build worlds in both Survival and Creative modes and can even join friends over local WiFi.
For those who have yet to experience Minecraft, it’s a game that taps into players’ imaginations to build entire worlds with various blocks. Minecraft – Pocket Edition has wood, stone, brick, dirt, wool and other materials that can be mined and crafted into block objects that are then placed at will on a giant grid that comprises the game’s worlds.
While creative mode is available as exactly that – a mode with unlimited resources designed for pushing the creative boundaries – survival mode is the more challenging option. In survival mode, players must acquire resources on their own and subsequently survive by building shelter and maintaining health. Health is affected by both personal injury (such as drowning or burning in lava) and being attacked by hostile mobs.
Minecraft – Pocket Edition varies from the PC version in several ways, but it remains essentially the same game, reinvented for iPad, iPhone and iPod touch. Some of the initial, more noticeable differences in the Pocket Edition include no hunger, limited mobs, no sleeping and no chests for storing items. But despite the current iOS version being limited by comparison to PC, the basic premise remains solidly intact even if presented in a different fashion. Navigating the 3D world, which is rendered in chunks, takes a bit of practice but can be mastered fairly quickly. The controls are part virtual D-pad, part touch screen with mining essentially accomplished through a series of tap and hold maneuvers.
Minecraft – Pocket Edition is compatible with all three iDevices running 4.3 or later, but is easiest played on the iPad’s larger screen. As of now, the multiplayer option is only available locally, but a future update could include an online multiplayer option. Still, fans of the game on other platforms will surely have reason to celebrate the mobility of a handheld version. Minecraft – Pocket Edition gives players the option to build anytime, anywhere.